Home /  Updates /  KFI Sauces come on board as Associate Sponsor

The team here are happy to announce that the second Associate Sponsor for the Toronto Curry Awards 2018 is KFI Sauces.

This family-run business has a true passion for Indian cuisine making it a worthy sponsor for the prestigious awards taking place this year.

The founders, Kiran Kataria, Ranbir Kataria and Rishi Kataria began as small operation in 2007 making just a few chutney sauces, the company has now grown into a successful national brand that creates a wide range of delicious and premium cooking sauces, marinades, and chutneys, which you can find in all major mainstream retailers and ethnic stores across Canada.

KFI Sauces pride themselves in creating distinguished flavour profiles by using fresh ingredients and adding a restaurant style quality to a number of home-cooked dishes in less than 15 minutes. 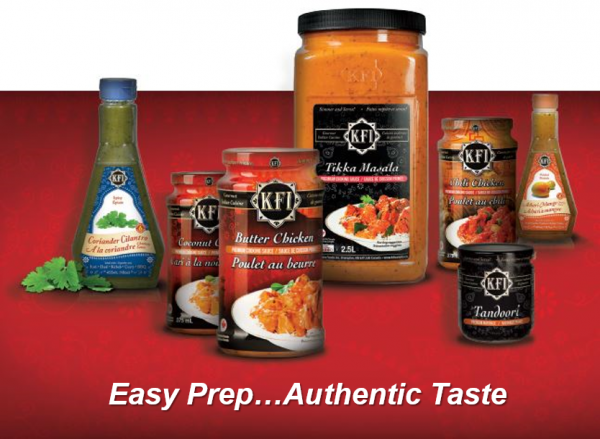 Dan Varaday, Director or Marketing and Sales at KFI Sauces said: “KFI the 11th fastest growing manufacturer in all of Canada ranked by Canadian Business in 2016. We’re extremely excited to be an associate sponsor with the first Toronto Curry Awards. It’s a brilliant collaboration and one we’re very excited about.”

The first ever Toronto Curry Awards will take place on 26 June 2018 at Holiday Inn Toronto Airport and is hoping to give the city’s restaurant scene a real boost by shining the spotlight on various South Asian food establishments dotted around the city.

The black tie, evening gala will be an unforgettable event filled with delicious cuisine and a whole host of fabulous entertainment.

To find out more about KFI Sauces, visit their website here, KFI Sauces.